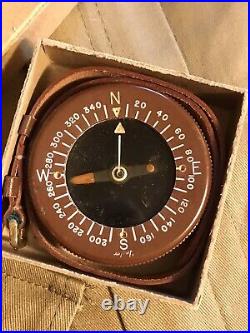 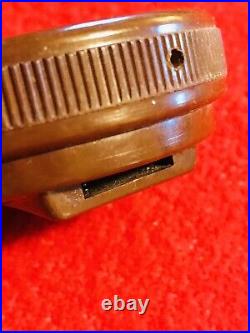 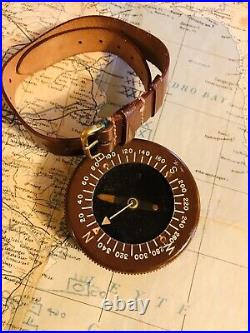 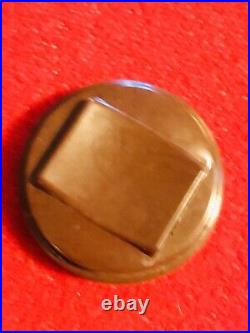 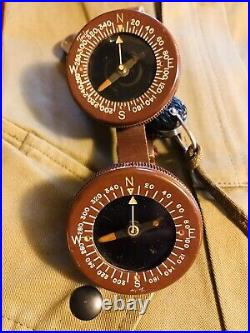 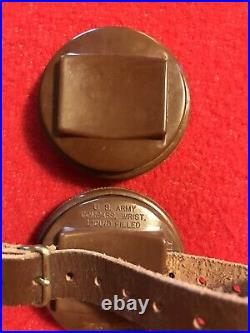 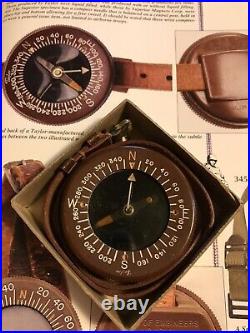 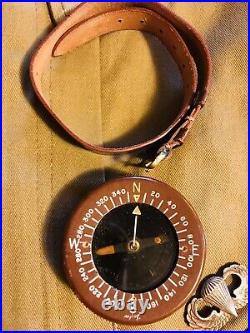 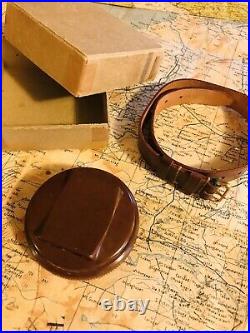 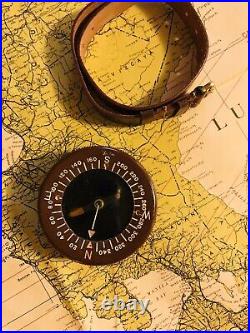 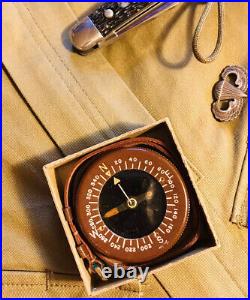 This is a RARE, VERY EARLY VARIANT of the wartime manufactured Brown'Bakelite "Taylor" marked COMPASS, WRIST, LIQUID-FILLED. (1) completely UNMARKED on the back! (2) completely DIFFERENT Bevel Face Markings (with FEWER degree markings)! With the ORIGINAL thin DARK RUSSET LEATHER BAND with correct tiny Brass or Gold-colored BUCKLE. NOTE: This is one of the RARE EARLY models from "Taylor" BEFORE markings were applied to the back!!!!

This was NOT a commercial contract, but a War Department contract with the U. These, in fact, were dated on the spiral damper inside. But to verify the exact date of manufacture the owner would have to break the glue seal and pull the Bezel off. This is NOT a current reproduction! This iconic "Taylor" model Compass, was manufactured ONLY during the war years and was issued contemporaneously with the " Superior Magneto" model, the later-issue " Lensatic" model, as well as the earlier " Pocket Watch" model.

The "Taylor" is less frequently encountered (and hence more desirable to collectors) than the " Superior Magneto" model with the "Corps of Engineers" markings. Though worn on the wrists, arms, jacket epaulets, and M1936 combat suspenders of Paratroopers , Airborne personnel e. Pathfinders, Glider troops this WRIST COMPASS was designed for and distributed to ALL ground forces in all theaters of the war. This WRIST COMPASS was worn by Paratroopers of the 505th PIR and the 504th RCT during O PERATION HUSKY in the drop on Sicily (July 1943); the troopers of the 82nd and the 101st during OPERATION OVERLORD over Normandy (June 1944); the troopers of the 82nd's 504th PIR during the seizure of the main bridge over the Waal River, Nijmegen during OPERATION MARKET GARDEN (September 1944); the men of the 503rd PRCT in the harrowing retaking of Corregidor, P.

(February 1945) as well as elements of the 11th A/B (the 511th PIR) during the drop on Tagatay Ridge in Southern Luzon, P. The month before (January 1945). ZERO cracks, scratches, or warping of the chocolate-brown'Bakelite' HOUSING. This Liquid-filled Compass is filled/dampened with ALCOHOL. The RADIUM-painted NEEDLE and the markings on the "Line of Travel" ARROW, and the COMPASS POINTS are in PERFECT condition as are the white-painted degree markings. The NEEDLE accurately points to MAGNETIC NORTH! ZERO scratches, cracks or'haziness' to the clear PLASTIC FACE. The FLAWLESS "Top Grain" LEATHER WRIST BAND, was still coiled in the Carton and has NEVER been threaded through the back of the Compass housing! The Wrist Band comes with a carefully stitched KEEPER. There is a tiny amount of'authenticating' verdigris where the BUCKLE makes contact with the Top Grain LEATHE R, but there is ZERO corrosion to the Buckle itself.

TAYLOR INSTRUMENT COMPANY of Rochester, New York. Excerpted from the River Campus Libraries. 1889 and David Kendall founded the Taylor Instrument Company in Rochester, New York in 1851 under the original name Kendall & Taylor. The general stock and trade of the company was in thermometers and other instruments for monitoring temperature; this focus would continue into the twentieth century.

Under George the company moved to Hill Street, a larger space with more room for the company's expanding employee forces. His brother Frank came to Rochester in 1862 from New Hampshire and re-named the company as Taylor and Richardson, under himself and Hamlet Richardson in 1866, operating out of a space at Buffalo Street. Under the two Taylors, the company officially became the Taylor Brothers Company in 1872. They first acquired the Watertown Thermometer Co. The acquisition of the Hohmann & Maurer Manufacturing Co.

Of Brooklyn, NY, in 1895, opened up business opportunities in the field of industrial applications for temperature and pressure instruments, expanding the range of the company's efforts far beyond the simple household and fever thermometers and barometers the company had produced up until then. In 1896 the Hohmann & Maurer Mfg. Company was moved to Rochester. Two years later in 1898 a new manufacturing branch was opened in London, England.

The same year, Herbert J. Winn opened a branch office for the Taylor Brothers Co. The acquisition of the Hohmann & Maurer Mfg. Short & Mason were manufacturers of high grade barometers, compasses, and other meteorological instruments. Elbert Taylor also became president in this year.

In 1911, after discussions about moving the plant closer to Rochester, the Watertown Thermometer plant was closed and all of its equipment installed in a new building adjacent to the main plant on Ames Street. 1911 also saw the opening of Taylor's own hospital, as well as the establishment of the Research Department. The company also opened an Export Sales Department in 1915 in Washington state and Washington, D. Locations in 1917, and the Chemical Laboratory, Physical Laboratory, and Sales Engineering Department in Rochester all before 1920. The company developed numerous contracts with the United States government and other manufacturers of munitions and instruments.

Much of the business done with the government in altimeters for aircraft was only possible because of the company's acquisition of Short & Mason, and the consequential acquisition of experience manufacturing aneroid barometers in their London factories. By 1918 Taylor's work force had expanded from 600 people to a team of more than 1270.

During this period James Ely was the Consulting Engineer on Instruments as Applied to Aircraft and traveled extensively, monitoring the use and function of Taylor instruments being used in fighter planes, among other applications. In 1919 he was recalled to Rochester to serve as General Sales Manager, and the following year in 1920 he would be elected Vice President of the company.

The 1920s saw the opening of offices in several more cities, including San Francisco, Cincinnati, Seattle, Cleveland, Los Angeles, Tulsa, and Milwaukee. The Tycos Company Library, which preserved many of the publications and materials of the company as well as collections of papers from important company figures, was opened in 1922. During this period the company's Board of Director's experienced turn-overs as Frank Taylor, who had been on the company Board of Directors, died in 1920; G. Elbert Taylor died in 1923, and John W. The Taylor Instrument Companies of Canada, Ltd, was incorporated in 1930.

The capital stock remained wholly owned by the Taylor Instrument Companies. The "Tycos" name was discontinued in an effort to promote brand unity and stability under the name "Taylor, " though some instruments would remain branded with " Tycos, a subsidiary of Taylor Instrument Companies" for continuity. James Ely retired from active work in 1932 due to illness, though he would continue to serve on the Board of Directors until his death in 1942.

Winn, after serving as president since 1913 and treasurer since 1907, retired in 1938, and L. Swift was elected president after him.

Winn was elected Chairman of the Board, a new position created after a special meeting of the stockholders in December of 1928. During World War II, in 1943, the company became the prime contractor for the manufacture or procurement of instruments for the gaseous diffusion process in the Oak Ridge Atomic Bomb Project at Oak Ridge, Tennessee. The production of these instruments, along with the manufacture of the bomb sights used in A-26 Invade r aircraft, were classified. Barometers and altimeters were also produced for use in aircraft, as well as millions of compasses for the Army and Army Corps of Engineers.

Taylor also produced a glass boot which could modulate the pressure inside, ensuring more consistent body temperatures for soldiers. Taylor received the Army-Navy "E" Award for excellence in wartime production three times, with presentation of a large flag to display their achievement on-site.

The company was also the joint recipient of the Award for Chemical Engineering Achievement, presented by Chemical and Metallurgical Engineering Magazine for their work as prime contractor for process control instruments for the Oak Ridge facility. Many Taylor employees were drafted for service during WWII, and the company took it upon itself to send boxes of support materials from home, including newsletters with company updates, to the employees in service. Substantial contributions to the Red Cross efforts were also made, with clubs made among the employees, like the Red Cross Sewing Circle, which was occasionally hosted at Taylor. Louise Pritzbure, who had been with the company since 1888 and worked in the Tube Store at the factory, organized the donation of clothes for war refugees.

Many social clubs and functions started at the company during the war era continued after the end of the war. Production of the company's commercial line began again in November of 1945.

1951 saw the marking of 100 years for the Taylor Instrument Company, a centennial for which much celebration and publicity was planned. The company held a large open house for the public and families of employees, taking the occasion as an excellent opportunity for publicity and promotion.

The company continued to develop in the second half of the twentieth century, and merged with Combustion Engineering in 1983, becoming one of the largest process instrumentation companies in the United States. Combustion Engineering became part of the ABB Group in 1989, joining the largest electrical engineering company in the world. This item is in the category "Collectibles\Militaria\WW II (1939-45)\Original Period Items\United States\Other US WWII Original Items".