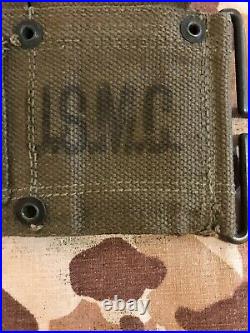 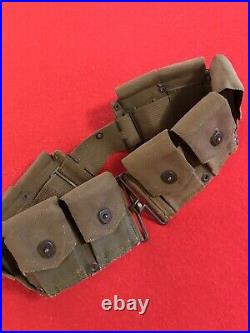 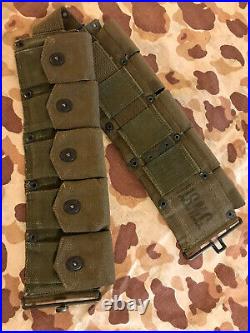 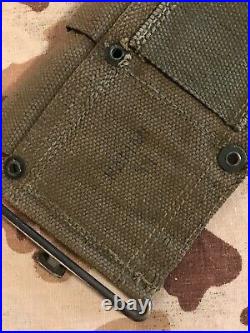 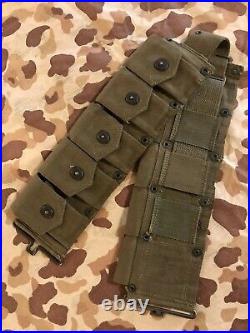 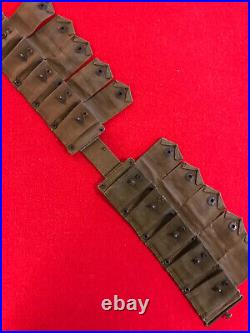 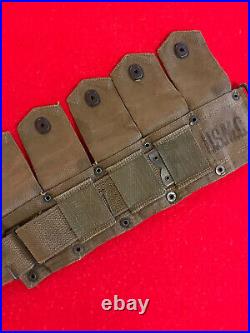 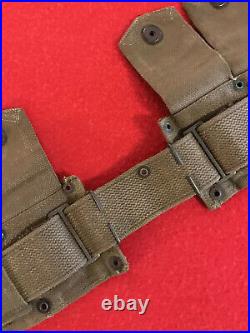 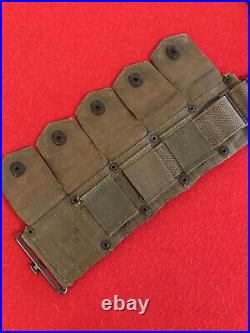 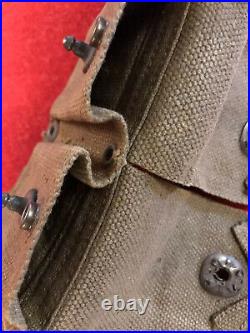 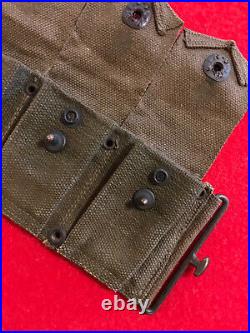 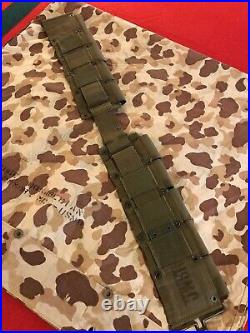 Here's a handsome, entirely ORIGINAL mid to late-war U. Wartime "combat veteran" that is in EXCELLENT condition! The contractor stamping is unquestionably that of HARIAN STITCHING COMPANY , done in its typically thin, lightly printed font. USMC field gear is SCARCE...

It has the period-correct, bold san-serif (WITH THICK LETTERED) U. On the interior of the left section has NOT been added after-the-fact to an Army Contract Belt with the U. On the exterior o f the right section. There is NO evidence whatsoever that a U.

Cypher has been erased for the exterior of the right section. This has the "Open'C' Guides" similar to those used on the Army contracts for the Connector Strap, not the "Closed Loop Guides" for the Connector Strap commonly found on USMC contract Belts! The Web Pockets have the "male" portion of the Domed "Durable Dot" Snaps... But NO Web Tape Retention Straps for the 5-round Clips for the 1903 Springfield!!

They have NOT been'surgically removed. They were never sewn into the Belt. But existing Webbing with the "male" portion already set in the fabric were utilized at the HARIAN mill!

It has the (period-correct for 1944) re-introduced Blackened BRASS Hardware throughout: Brass Buckle, Brass Eyelets, Brass "Lift-the-Dot" Snaps. There are ZERO frays, loose stitches, tears, major stains, odors, markings, no stencils, or obvious damage! This Belt appears to not have been adjusted.

There is virtually NO wear to the finish of the Blackened BRASS BUCKLE, EYELETS, and SNAPS! The only other known manufacturers awarded contracts by the U. Marine Corps for the M1923 Cartridge Belt were ATLAS and BOYT, but this is made by HARIAN STITCHING COMPANY of Haverhill, Massachusetts. Only 4% of all who served were MARINES! During World War II about 16,000,000 personnel served in the U.

Approximately 11,200,000 or 70% served in the U. Army; 4,200,000 served in the Navy; but ONLY 660,000 served in the Marine s. Not many of these U. Contract M1923 CARTRIDGE BELTS were made in the first place. EVEN FEWER survived the harsh rigors of the Pacific Theater, e. Coral, Salt Water, Intense Sunlight -- photo radiation! Those FEW that did were reissued, and reissued, and reissued up through the Korean War, per the Corps custom of frugality, and were simply USED UP. This is the "genuine article" and could very well have gone ashore with the 3rd Marine Amphibious Corps for the Second Battle of Guam, July to August 1944, which cost 3,000 U.

Troops KIA, as well the Marianas and Palalu Island Campaigns (OPERATION FORAGER , June to November 1944), and the bitter fighting of 1945 (the V Amphibious Corps's storming of Iwo Jima, and the extemely vicious, costly sea and air war to secure Okinawa). History of HARIAN STITCHING COMPANY OF HAVERHILL, MASSACHUSETTS.

HARIAN STITCHING COMPANY, employed about 400 workers during WWW2. HARIAN and was one of many textile manufacturers in Haverhill, but was awarded multiple War Department contracts to manufacture Cartridge Belts, Magazine Pockets, Cases, Haversacks and Cargo Packs, M1 Carbine and M1 Rifle Scabbards. Haverhill, MA, north of Boston, was a major textile and shoe industry in the first half of the 20th C.

Haverhill began as a farming community of Puritans, largely from Newbury Plantation. Pentucket was renamed'Haverhill' (after the Ward family's hometown in England) and evolved into an important industrial center, beginning with sawmills and gristmills run by water power. The town was for many decades home to a significant shoe-making industry. By the end of 1913, one tenth of the shoes produced in the United States were made in Haverhill, and because of this the town was known for a time as the " Queen Slipper City ". The item "WWII USMC Cartridge Belt (HARIAN -44-) 10 Pocket.

M1923 OD#7 RARE Variant" is in sale since Saturday, September 19, 2020. This item is in the category "Collectibles\Militaria\WW II (1939-45)\Original Period Items\United States\Field Gear, Equipment". The seller is "bataan12213" and is located in Little Rock, Arkansas.

This item can be shipped to United States, Canada, Bahamas, Uruguay.