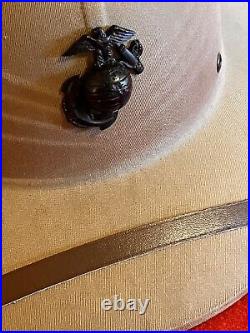 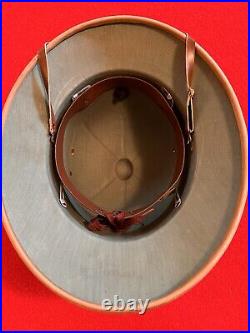 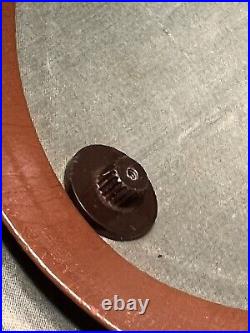 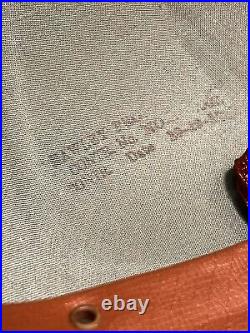 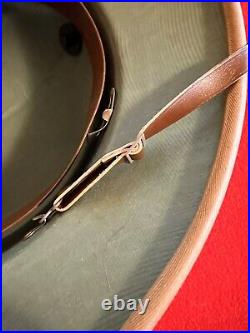 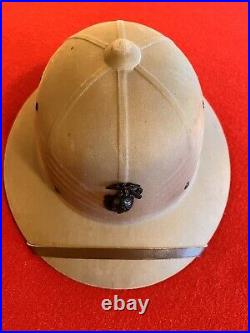 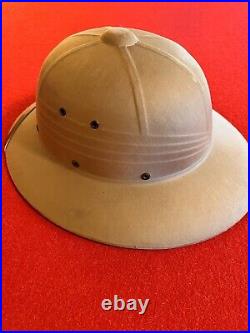 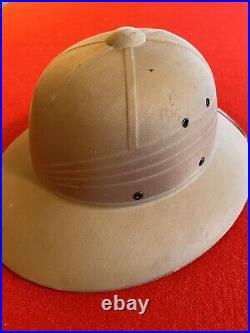 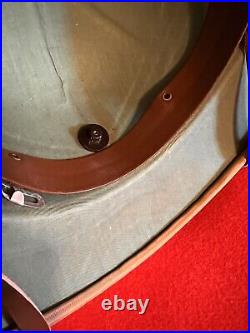 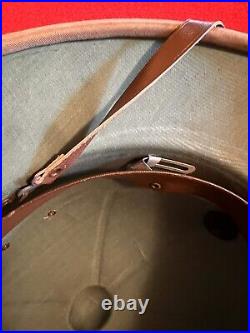 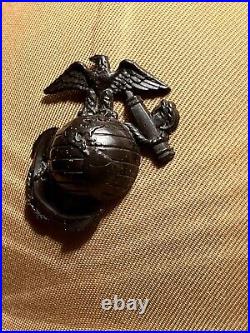 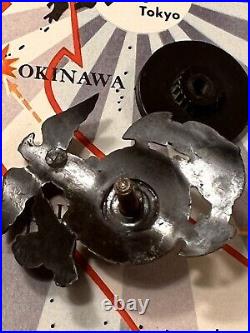 This may have belonged to LT William H. Kiekhofer of Yale and U. Of Wisconsin Medical School, Michigan State University Hospital, and Tulsa Medical College, a noted obstetrician and professor, who served aboard the USS Black Hawk during WWII.

At the outbreak of the war, December 7th the USS Black Hawk was in Borneo, from where she steamed to Java, Darwin, Australia, Pearl Harbor and on to Alaskan waters in July 1942. This is a genuine, mid-war, "1943" or possibly "1945", USMC-specific awarded contract to the "HAWLEY PRODUCTS COMPANY " of Geneva and St. Charles, Illinois (and not the secondary contractor, INTERNATIONAL HAT COMPANY) with the wartime U. Marine Corps "NOm" contract prefix and not an ARMY or U. Awarded contract number stamped inside the crown.

Most of the Fiber Helmets encountered today are post-war models with a post-war prefix, e. " and/or the Navy's "NXs prefix in front of the the contract number.

These Fiber Sun Helmets were formally adopted by the Marine Corps in 1940, with "corrections" in May 1941 regarding the Chinstrap. It was worn pre-war in Shanghai, China by 4th Marines; in Guam during the 1930s; in the Pacific Theater in ALL forward areas from Guadalcanal in 1943 to Okinawa in 1945 by Ground Troops, many senior and General Officers, USMC aviators when not in the air; as well S tateside in training facilities, replacing the M1910 Fur Felt Field (Campaign) Hat. Marine Corps CONTRACT NUMBER and data with the'NOm' prefix!!

Late-war models were covered in Olive Drab Green primarily for USN contracts, before returning, Post-war through the Vietnam era, to the use of both OD Green as well as Suntan Khaki. This model comes with the correct early HAWLEY LEATHER CHINSTRAP (with the tiny Blackened Steel Ladder Buckle) identical to what HAWLEY used on their M1 HELMET LINERS. NOTE: A May 1941 War Department directive mandated the replacement of the Russet Leather Chinstrap with a Khaki COTTON CHINSTRAP as as cost-saving directive that year, but obviously materials on hand were used until exhausted.

The Scarcity of USMC marked clothing, Fiber Helmets, and equipment. During WWII about 16 million personnel served in the U.

Compared to the ENORMOUS number of Army Fiber Helmets that were manufactured, relatively very, very few U. Specific contract Fiber Helmets were ever made -- ESPECIALLY those made of the Early Light Shade Khaki which was beginning to be phased out by the end of 1943 by the Marine Corps Equipment Board due to the superior'camouflage properties' of the Darker Shade OD#7 fabrics. Though seen in photographs of all the island campaigns, few survived the harsh rigors of the Pacific Theater, e. Coral, Salt Water, Intense Sunlight -- photo radiation. Those INCREDIBLY FEW t hat did survive are most often found in seriously battered, worn condition!

These were fragile pressed fiber helmets and did not not did not hold up well when exposed to rain, high humidity, or rough treatment, and very, very few survived service in the Pacific theater is ANY condition, let alone in EXCELLENT+++ condition. There are MANY post-war examples on the market with "DSA" contract prefixes. The 99% of the few true WARTIME examples found today are "USN" contract helmets, not "USMC" contract helmets! ZERO dents, "soft spots, " scrapes, fraying at the brim's edge, mildew staining, de-lamination of the FABRIC. Only evidence of age is the usual and very minor, superficial rubs of the cotton.

Well-marked inside, HAWLEY PRODUCTS CO. But as is often the case with these Fiber Sun Helmets, the stamping on a concave surface results in a less than perfect'print' at one end! NAMED in a neatly, legibly hand-lettered hand, is the last name of Lieutenant Kiekhofer. RARE'Tenite' Eagle Globe Anchor (EGA). This is a VERY SCARCE wartime-conservation EGA device. These were made only in 1943 by only a single contractor, the AMERICAN INSULATOR COMPANY (AICO) molded of material from the TENNESSEE EASTMAN CORPORATION of Kingsport, Tennessee, to which they gave the trade name, Tenite. Though similar to Leo Backland's'Bakelite,' EASTMAN's proprietatray'cellolosic thermoplastic product,' created in 1929 and registered in 1932, was only used to make EGA's for the USMC in late 1942 and early 1943.

The EGA device is quickly recognized by (1) the short connecting pieces between the Anchor's FLUKES and and the bottom of the GLOBE, and (2) the short connecting piece running from the bottom edge of the Eagle's left WING and the top end of the Anchor's STOCK. It appears that despite Eastman's advertising claims that this injection-molded material, while"conserving valuable quantities of brass" was also capable of withstanding exposure to extremes of weather conditions in all climates and is virtually proof against distortion or breakage from hard blows.

As a matter of fact the material was deemed unsatisfactory by the USMC for insignia "due to excessive breakage, " and no further order were placed, effective 1944! Complete with the very SCARCE Distinctive molded BROWN'Tenite' EAGLE-GLOBE-ANCHOR (EGA) device with the original, unique, molded BROWN'Tenite' one-piece combination WASHER/SPINNER which is often missing or has been replaced with the zinc/alloy spinner from the smaller Lapel devices. The backs of these were marked with a triangle or " Delta " and a number. This example has the typical the'raised' mold number'1' to the right of the'triangular' delta-shaped logos on the reverse. These devices have been encountered with numbers ranging from'1' to'12. This EGA with a number "2" was from one of the VERY FIRST production runs of this device! Tenite is a brand of cellulosic thermoplastic materials produced by the Eastman Chemical Company. Created in 1929, and trademarked in 1932, Tenite has been used in a wide variety of consumer, industrial, architectural and medical applications.

Tenite cellulosics are manufactured from renewable raw materials (soft woods); they exhibit many of the same tactile and finish properties as wood, yet can easily be molded and extruded. Historically, applications for Tenite have varied from radios and telephones, to toys, toothbrushes and eyeglass frames.

Tenite is NOT a durable plastic. Objects manufactured from Tenite slowly deform and warp over decades eventually rendering the products unusable. Some formulations of Tenite are susceptible to surface mold. This item is in the category "Collectibles\Militaria\WW II (1939-45)\Original Period Items\United States\Hats & Helmets". The seller is "bataan12213" and is located in this country: US.