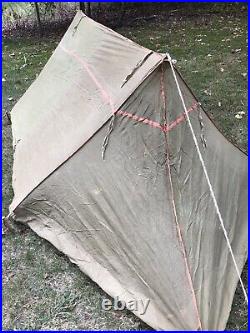 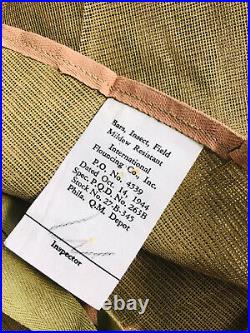 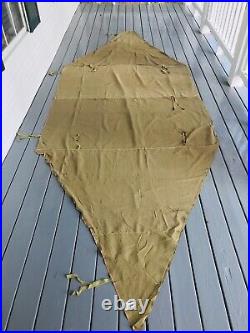 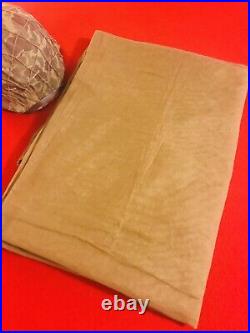 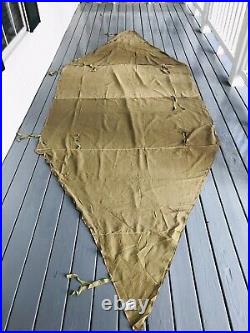 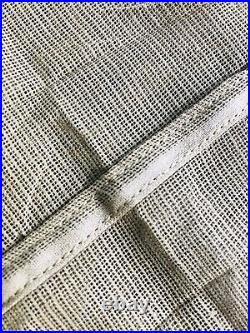 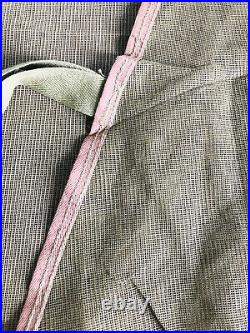 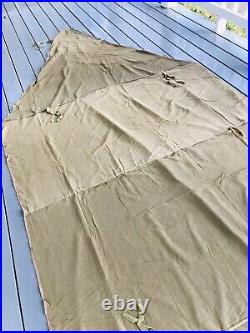 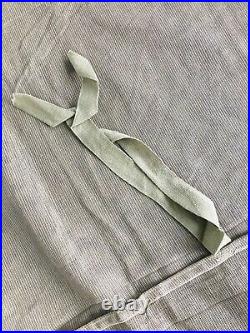 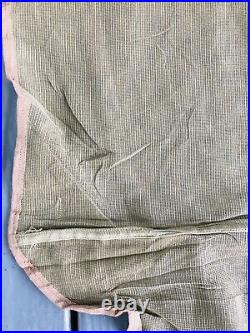 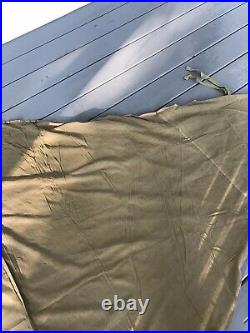 WWII USMC Rare EARLY "Mosquito Tent" ("Field Insect Bar 1943") Jungle. Made by International Flouncing Co. This is a RARE piece of gear with a PERFECT CONTRACT TAG (which is often missing)! This Khaki OD#3 COTTON not Nylon! "FIELD INSECT BAR" has the same TENT configuration as two joined Shelter Halves, but with the addition of a 12-inch APRON along the bottom Edge.

The starched fabric CONTRACT TAG sewn in the seam reads. This is NOT the frequently encountered rectangular Insect Bar designed for a Cot! This example is in ABSOLUTELY PERFECT condition! ZERO frays, punctures, stains, snags, holes, tears from long term storage! This distinctively KHAKI "Insect Bar, Field" was introduced in 1942.

These "FIELD INSECT BARS" were procured when available by ALL branches of the Armed Forces: the USMC, AAF, "Seabees, " as well as the Army as part of a coordinated effort along with anti-malaria medicine, e. ATABRINE, to combat debilitating MALARIA.

MALARIA resulted in far more battle-casualties than Japanese fire! This is the very SCARCE piece of "Jungle gear"-- This wartime " FIELD INSECT BAR" is not to be confused with the'box-like Bar that was designed for use with a cot.

All the SEAMS are finished and bound with a mix of SALMON-colored and OD#3 BIAS TAPE. It has numerous OD # 3 FABRIC TAPE TIES along the RIDGE LINE, protruding DOUBLE -ENDS, and BOTTOM EDGE to facilitate its erection either with 2 standard FOLDING TENT POLES - or by rope-suspension between two trees. The TIES have NEVER BEEN KNOTTED!

This a COMPLETE ENCLOSURE with no opening. NOTE: This sale is ONLY for the Khaki Mosquito TENT. The POLES, ROPES, and TENT PEGS are NOT included in this sale. The photo of the erected Mosquito Tent is of an IDENTICAL piece.

I did not want to knot and tie the PRISTINE fabric TAPE TIES on this Mint NEW OLD STOCK Unissued example. The INTERNATIONAL FLOUNCING COMPANY, INC. The Other Foe: The U. Army's Fight against Malaria in the Pacific Theater, 1942-45 , by Seth Paltzer.

Disease has always had a major impact on armies at war, often producing more casualties than combat wounds. The history of the U.

Army is full of examples of this fact. The Civil War Trust estimates that for every three men killed in combat from 1861 to 1865, another five died of disease. By the twentieth century, medical care and preventative measures had been greatly improved, but these advances were often difficult to implement on the front lines, and disease continued to exert an immense force in war, especially in the remote islands of the South Pacific during World War II. The average soldier serving in the Pacific Theater of Operations (PTO) fighting against the Japanese faced a great many challenges and dangers. Often overlooked by histories of the war, one of the most.

Insidious of these was malaria. This disease, while not typically fatal to the infected soldier, would take him out of action for a prolonged period just as surely as if he had been wounded in battle. The Army's fight against malaria is a fascinating story of man versus nature, with America's success in the war against Japan at stake. Malaria is a tenacious disease that can have long-lasting effects on the infected person. American soldiers encountered two different types of the disease in the PTO : benign, which causes violent chills, fever, and weakness, and malignant, a form much more likely to cause death.

Both types had the potential to turn a battle-ready soldier into a bedridden hospital case in a very short period of time. The disease itself is caused by a mosquito-borne parasitic protozoan that attacks the red blood cells and liver of the infected person. The damp, swampy environments encountered on many Pacific islands were ideal breeding grounds for the anopheline mosquitoes that transmit the disease. Furthermore, the many shell craters, foxholes, and ruts created during combat operations all served to collect water, offering plentiful opportunities for the insects to breed and multiply. When the mosquitoes feed on an infected person, they become carriers of the parasite, and then deposit the disease in the bloodstream of another person when they fed again.

The ease with which the disease spread was not the only problem the Army faced. Soldiers in combat were often more concerned with fighting, marching, and finding their next meal or place to bunk down than they were with using proper mosquito repellent and sticking to strict antimalarial pill regimens. In the Philippines, James Gillespie of the U. Army Medical Department noted in his official history that, as troops retreated in the face of the Japanese assault in 1941, large amounts of medical supplies were abandoned in hasty withdrawals. Healso noted that individual soldiers often dumped their antimalarial pills since they thought of them only as a useless inconvenience. As a result, the disease became a huge problem, waylaying thousands of soldiers and support personnel. Army Heritage and Education Center, the Allied defenders of the Philippines were devastated by an epidemic of malaria.

About 24,000 of the 75,000. American and Filipino soldiers involved in the desperate campaign to stop the Japanese advance in 1942 were suffering from malaria. If these troops had been healthy, they could have greatly bolstered the defense against the 57,000 Japanese invaders early in the war. The lesson learned by the Army from the Philippines was that effective malaria control was essential for the successful conclusion of the campaign in the Pacific.

The year 1942 proved to be an absolute low point for the Army in its efforts to prevent malaria from ravaging troops deployed to the Pacific. Infection rates were high across the entire Southwest Pacific Area (SPA), and in some localized hot spots, astronomically so. One of the hardest hit areas was the Allied base at Milne Bay, Papua, which provided support for the campaign against Buna and Gona in late 1942 through January 1943. During the campaign, malaria was rampant.

Army Center of Military History, incidence of the disease reached an astounding 4,000 cases per 1,000 soldiers per annum. Essentially, this was the equivalent of every single soldier at Milne Bay coming down with the disease at least four times throughout the course of the year. This had a devastating effect on the efficiency of the units based there, where it was estimated that they lost around 12,000 man-days a month in work due to the disease. Infection rates for the rest of the area of operations were not much better. According to tabulations done after the war, Army medical personnel treated 47,663 cases of malaria in the SPA in 1942.

The rate of infection was calculated at almos t 251 cases per 1,000 troops i n the entire area. With a quarter of all troops infected, malaria was proving to be as large a menace to American operations as the Japanese. Additionally, it was discovered during the fighting at Buna that efforts to reduce the incidence of the disease quickly broke down once combat operations began. The Medical Department estimated that casualties due to this disease for this period outnumbered combat casualties on an order of seven to ten times. Eichelberger, commander of the U. Forces bogged down at Buna, noted that disease was a surer and more deadly peril to us than enemy marksmanship. We had to whip the Japanese before the malarial mosquito whipped us. The high rate of preventable losses of manpower and work-days seen in Papua were simply untenable if the United States and her allies were to take the initiative and defeat Japan's armies in the Pacific. This item is in the category "Collectibles\Militaria\WW II (1939-45)\Original Period Items\United States\Field Gear, Equipment". The seller is "bataan12213" and is located in this country: US. This item can be shipped to United States.