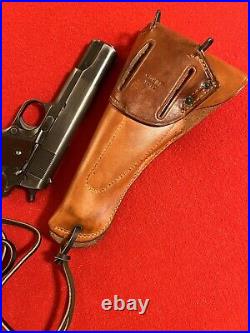 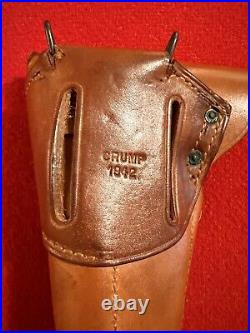 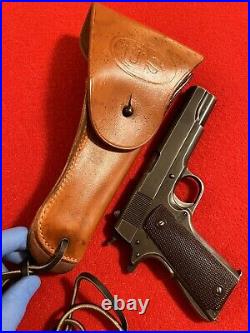 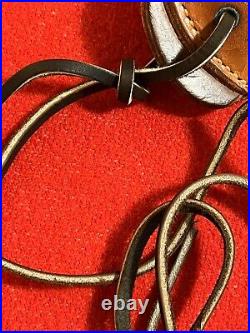 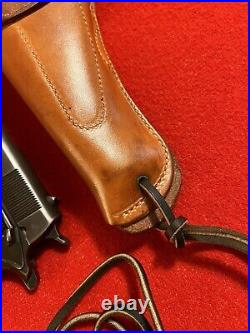 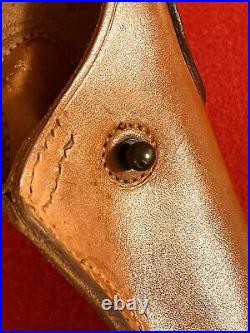 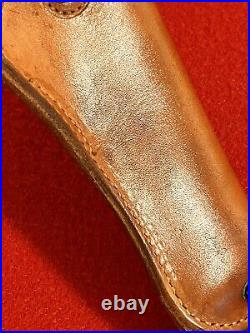 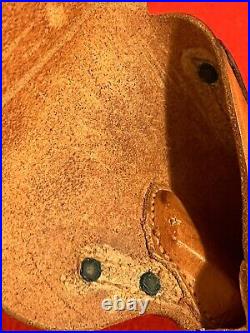 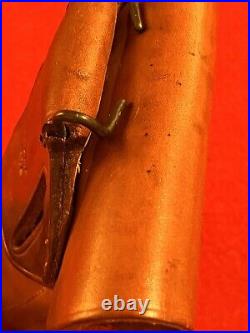 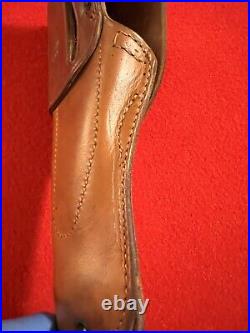 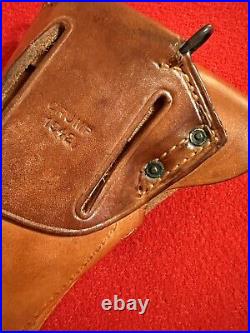 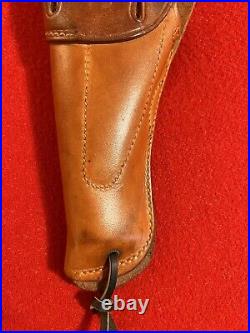 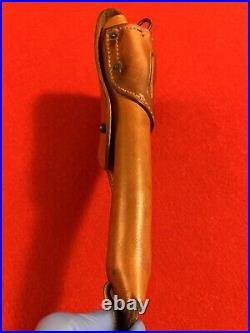 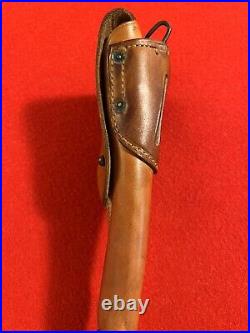 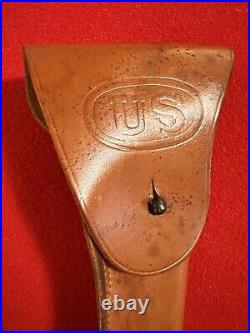 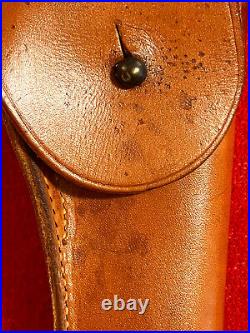 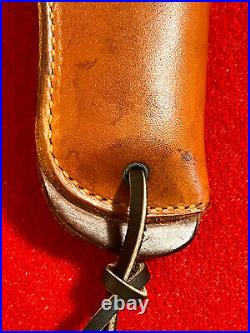 WII USMC Holster M1916 from a "VERY RARELY SEEN" maker, the BENJAMIN T. Of Houston, Richmond, Virginia from the very first year of the war. This is an ORIGINAL and " VERY RARE" Holster for the. Complete with the ORIGINAL 48" x 1/4" heavy ELKHIDE LACE, which is invariably missing from most wartime examples! Of the sixteen harness/saddlery/leather workers awarded contracts for the M1916 Holster, NONE produced FEWER than the BENJAMIN T.

And "CRUMP " marked Holsters amounted to LESS than 1% of the total manufactured! By comparison BOYT manufactured over 430,881 holsters, ENGER-KRESS manufactured 341,000, GRATON-KNIGHT produced 188,437. Of the sixteen manufacturers who were awarded contracts during WWII to manufacture the M1916 Holster, the vast majority of Holsters, marked and unmarked, were produced in 1942 by the larger firms.

These simply do not turn up often, let alone in SUPERB condition!!! This EARLY-WAR, deeply embossed "CRUMP 1942" Holster from the shop in Richmond, was what was issued to the ARMY, U. MARINE CORPS and the NAVY during WW2.

This particular Holster was produced contemporaneously with the Marines' and the Army's very earliest campaigns of the war, both in Europe and the Pacific from North Africa (OPERATION TORCH) to the battles of Central Europe, the Po Valley, Leyte and Luzon in the Philippines, Central Burma. And from every Pacific campaign from Guadalcanal in the Southern Solomons to Saipan, Tinian, Tarawa, Peleliu, Guam, and finally Iwo Jima and Okinawa -- and literally every ground and air campaign from 1942 ti 1945 -- and, yes, these M1916 went aloft n the cockpits of fighters and on the hips of bomber crewmen in every theater of the war. NOTE: There were no M1916 Holsters specifically stamped on the Flap with "USMC" or "USN" during WW2.

This M1916 Holster was worn by Marine and Army Officers, NCOs, personnel with crew-served weapons, Aviators and Pilots, many of whom chose to carry a large frame M1911. 45 ACP in a belt holster such as this one. The M1916 Holster was also worn by any other Marine or Soldier who could lay his hands on a side arm!

FANTASTIC color of Light NATURAL flesh-colored Cowhide. This example has the authenticating'patina' of real age: a lightly age-mottled appearance on the Flap! ZERO crazing' at the fold of the Flap. The Leather at the point of attachment of the M1910 Belt Hook is STRONG and 100% FREE of cracks, wear or'crazing. ZERO breaks in the'Hole' on the Flap for the Brass STUD only the gentle, authenticating'patina' of 77 years of age!

ZERO significant scuffs, scratches, cuts, or crazing to the Leather! This example has never been destroyed with Neatsfoot Oil of black dye! PERFECT high relief of the embossed U. The FLAP STUD, all four of the RIVETS, the two EYELETS for Leather Lace TIE-DOWN are still SECURELY SET! Present also is the authenticating'patina,' very, very minor traces of VERDIGRIS on the Rivets.

EXCELLENT finish on the period-correct Blackened Steel M1910 BELT HOOK. ZERO breaks in the CORRECT ORANGE LINEN THREAD! Current Holsters and reproductions are seen with WHITE POLYESTER thread. The Wooden BLOCK at the Toe of the Holster is present and the Holster retains it's perfect FACTORY shape.

The leather-covered Wooden BLOCK near the Trigger Guard (to cant the pistol Grip away from the wearer's body) is ALSO in securely stitched in place. The heavy ELKHIDE (not cowhide) 1/4 LACE (which is often missing from many Holsters) is strong, UNBLEMISHED and in MINT condition. Was founded, originally, in 1875 and described themselves at the time as Makers of INDIAN BRAND (tm) Harness and Saddlery Goods. Today they are known as the BT CRUMP CO.

And manufacture premier English dressage, jumping, and show saddles, and are still based in Richmond, Virginia. Article, appeared in the February 22, 1914 issue of the Richmond Times-Dispatch. Has Made Richmond Harness Headquarters for the South.

A large part of the credit for making Richmond the harness center (sic) of the South and bringing to this city a big slice of the business which formerly went to the cities of the North and West, belongs to the Benjamin T. It is ra relatively young company, only twelve years old. In July 1910 the company was reorganized after the death of Benjamin T. Crump and the company taken over by new officers.. The Crump Company operates a splendidly equipped plant for the producing quality harness, saddles and all strap work pertaining to the horse. They are also one of the largest jobbers in sadddlery hardware, robed and blankets. During the past five years the sales of the Benjamin T. The territory covered by this company included the States of Virginia,, North and south Carolina, Georgia, Florida, and Alabama. They report splendid business this season.. Richmond has good reason to be proud of concerns like the above, which are building big success on the firm foundation of quality, service and progressiveness. EXCEPTIONAL research by Scott Meadows, "A Word on Holsters: Part 2" at "pre-98". HISTORICAL CONTEXT AND ACTUAL USE. From the time that war broke out in late 1941 until sometime in late 1943 almost all the holsters used by the American Forces in the field were leftover from WW1 as were most of the pistols. It is very common to find a vet brought back WW2 Colt in a WW1 era issued holster. From an historical context a holster was a holster, they used what was available in the supply chain. 70 years later we collectors like to tidy things up a bit and stick WW2 made pistols in WW2 made holsters. Many makers stopped dating holsters sometime in 1944.

All WW2 made holsters were constructed of russet tan oil finished leather. There were 16 known US contractors for these holsters having their maker marks stamped on the back of the holster. Some are very common and some are rarely seen.

A handgun was essentially a supplemental sidearm and was generally employed in actual combat action only when the more effective rifles and automatic arms were unavailable, out of ammunition or damaged. 23, 1943, Marine Corps document titled "Report on Infantry Weapons in Combat" gave a brief synopsis of the various arms used by a Marine Raider Battalion on New Georgia Island. The section pertaining to the. 45 ACP simply stated: Held up very well, but used very little. 45 pistols were acquired by troops who were not officially authorized to be issued them as called for in their unit's TOE (Table of Organization and Equipment).

However, such regulations were rarely enforced in combat zones, and many G. S and Marines who could acquire a. 45 did so, and considered themselves lucky. A leather hip holster, the Model of 1912, was standardized soon after the M1911's adoption. This holster had a swivel attachment to make it better adapted to cavalry use.

Just before America's entry into World War I, the Model of 1916 holster was adopted, which differed from the M1912 primarily in the deletion of the swivel feature. Both were fitted with wire hooks that attached to the grommets on the bottom of the standard webbed pistol belt or cartridge belt. There were sufficient numbers of World War I-vintage M1916 holsters to meet the demand until the U.

Became actively involved in World War II. The M1916 holster was put back into production and almost 3 million were made by 16 different commercial firms between 1941 and 1945.

Nevertheless, the desire to replace the pistol with the carbine continued throughout the war. This was evidenced in a Jan. 26, 1943, Marine Corps document.. Despite this official stance, pistols were issued in ever-increasing numbers during the war.

As an example, the U. Marine Corps' TOE (Table of Organization and Equipment) in 1942 authorized 798.

45 pistols for a Division but, by 1945, the authorized figure had been increased to 1,707. So much for efforts to get rid of the pistol.

The situation was much the same in the U. Army where the carbines and. 45s were procured and issued side by side in large numbers. The total number of M1911A1 pistols manufactured during World War II was 1,878,742. 45 was an integral part of America's World War II infantry small arms arsenal!

This item is in the category "Collectibles\Militaria\WW II (1939-45)\Original Period Items\United States\Field Gear, Equipment". The seller is "bataan12213" and is located in this country: US.

This item can be shipped to United States, Canada, Bahamas.